Last school year I printed morning routine charts for the kids to follow.  They put up a sticker each morning when they had completed all tasks.  Then I had to remember to print out a new chart for each of them for the next week.  It worked for a long time, but I wanted to try something new this year.

I looked around on the interweb and didn't see anything too different from what we've already used.

Then I found a fantastic idea at My Name Is Snickerdoodle that looked different from all the others.

I just completed the kids' morning routine charts (charts isn't really the right word, but you'll see what I mean) last night.  They practiced with them this morning, and tomorrow is the REAL DEAL (first day of school).

Here are their new morning routine trackers (trackers is a better word): 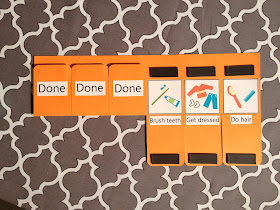 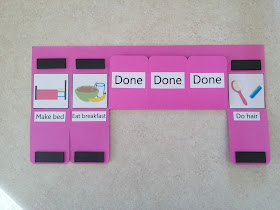 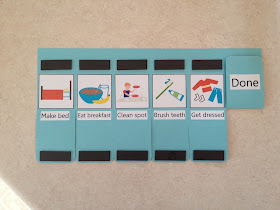 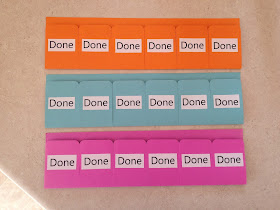 Basically, each kid starts with all the flaps open first thing in the morning.  There's a picture as well as a phrase to specify each task in their morning routine.  Once each task is complete, they can close that flap to show the word "Done."  The magnet strips hold the flaps closed.

I still need to figure out where to put up each kid's morning routine tracker, but I think I'll use Command Strips to put them up in their bedrooms.

Right now the kids love these and are super motivated.  We'll see how long it takes for the newness to wear off and the nagging to start back up. :)

Oh, and in case you're wondering, I found my pictures on Craft, Interrupted.   There's a girl version and a boy version.  I copied the set of pictures into PowerPoint and cropped the set down to each picture that I wanted to use.  Then I inserted the black squares around each shape.

All the other details can be found in the tutorial on My Name Is Snickerdoodle (click the link above).